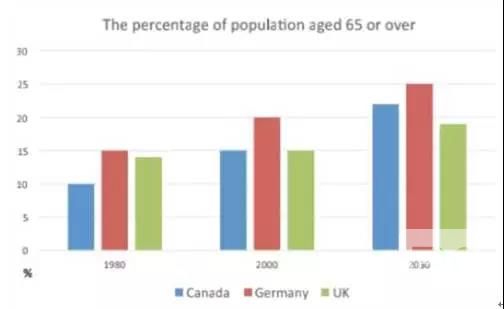 The bar chart presents the information of the proportion of elderly citizens in three different countries in the year of 1980, 2000 and 2030.

It is apparent that five decades witness a rise in the percentage of the elderly in all three countries, among which Germany has the highest percentage throughout this period.

The percentage of the pensioners in Canada is on the rise, from 10 percent to more than 20 percent in the final year. In addition, the figure Canada for overtook that of the UK in 2000, becoming the country which has the second largest proportion.

The percentage of the old in the UK also grows over this period. However, it is noticeable that the increase was less significant in the first 20 years, though it accelerated gradually in the latter twenty years.

Germany, where there always is highest proportion of the old, also experiences the most steady increase, peaking at 25 % in the final year.

Some people think governments should spend money on measures to save languages with few speakers from dying out completely. Others think this is a waste of financial resources. Discuss both views and give your opinion.

Some languages are in the phase of extinction due to the low population of the speakers. A group of people believe that governments should allocate some budget to preserve these languages, but others think that it would not be effective and efficient. The following essay will discuss both opinions, but I believe that maintaining the diversity of languages is an undertaking which cannot be lost sight of.

On the one hand, some people believe that spending public money in protecting minority languages is a waste of money and time. The cost of maintaining the languages would be expensive since there are only a small number of people who speak the languages, and many young people would refuse to learn and speak these languages as well. They believe that the government grant could be allocated for other important matters such as education, public transport and health.

On the other hand, many people believe that it is necessary for governments to preserve the existence of minority languages. Every nation has its own traditional languages which are spoken by their ancestors and descendants, and they have been passing through for many generations. There are a number of myths, legends, traditional and cultural activities which are passed over to the next generation via these languages, as many tribes have no written literature. And if these languages do extinct, then it means that many nations will lose their precious historical cultures. Therefore it is important for governments to take some efforts in maintaining minority languages, though the cost of preserving them might be considered as expensive.

As far as I think, language is not only a communication tool but also the root of a nation’s culture. Therefore, understanding a language is often the key to appreciating the full meanings of a nation’s identity and it could also lead to a sense of national pride. Furthermore, as government is the bearer of our rights, it should have the responsibility to preserve this cultural heritage of all members of a society, rather than just that of the majority. Therefore, I think government should invest abundant money in conserving languages which are used by few speakers in order to protect their own culture.